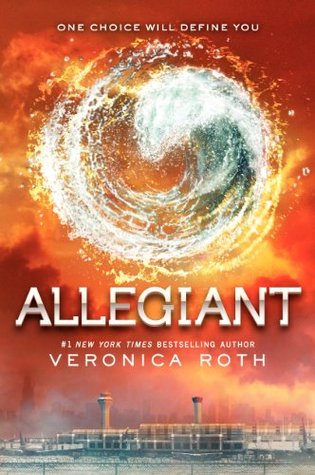 The faction-based society that Tris Prior once believed in is shattered—fractured by violence and power struggles and scarred by loss and betrayal. So when offered a chance to explore the world past the limits she’s known, Tris is ready. Perhaps beyond the fence, she and Tobias will find a simple new life together, free from complicated lies, tangled loyalties, and painful memories.

But Tris’s new reality is even more alarming than the one she left behind. Old discoveries are quickly rendered meaningless. Explosive new truths change the hearts of those she loves. And once again, Tris must battle to comprehend the complexities of human nature—and of herself—while facing impossible choices about courage, allegiance, sacrifice, and love.

Told from a riveting dual perspective, Allegiant, by #1 New York Times best-selling author Veronica Roth, brings the Divergent series to a powerful conclusion while revealing the secrets of the dystopian world that has captivated millions of readers in Divergent and Insurgent.

“I wonder if fears ever really go away, or if they just lose their power over us.”

I’m having some difficulties writing this review. It’s hard to explain my feelings, or more accurately my lack of feelings.

Let me start by saying that I loved both divergent and insurgent and was very excited to read allegiant. But it just wasn’t what I expected it to be. Overall I felt sort of disconnected with the characters… And I don’t know exactly the reason for that, as it didn’t happen in the previous books, but while reading this one, I can’t say that I was feeling much of anything!

As far as the plot goes, it was not what I was hoping for. The action that we were used to from the previous books is pretty much non-existent in this one. There weren’t any plot twists until the very end of the book, but up to that point everything was very predictable. Nothing too major happening, just more of the factions etc drama that we’re used to. After the ending of insurgent, I was really excited that everyone found out there was a world outside the place where they were living and eager to see what it would be like! That, unfortunately, was another disappointment, since the outside world was, again, nothing really exciting.

As far as the ending – don’t worry I’m not going to spoil you – I did not hate the idea, but the way it was written made me feel no emotions at all. I just finished the book without a sense of closure. I really wish I could connect with it more! If this wasn’t part of a series I love I would have given it a lower rating, but I can’t ignore the “glow” of the previous books, so 3.5 it is!

I pace in our cell in Erudite headquarters, her words echoing in my mind: My name will be Edith Prior, and there is much I am happy to forget.