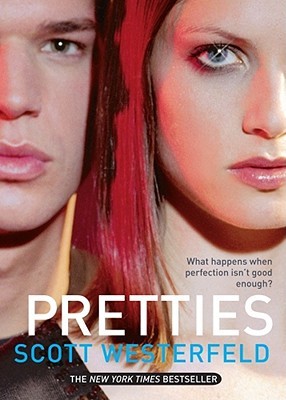 Tally has finally become pretty. Now her looks are beyond perfect, her clothes are awesome, her boyfriend is totally hot, and she’s completely popular. It’s everything she’s ever wanted.

But beneath all the fun — the nonstop parties, the high-tech luxury, the total freedom — is a nagging sense that something’s wrong. Something important. Then a message from Tally’s ugly past arrives. Reading it, Tally remembers what’s wrong with pretty life, and the fun stops cold.

Now she has to choose between fighting to forget what she knows and fighting for her life — because the authorities don’t intend to let anyone with this information survive.

Well, after the cliffhanger at the end of the 1st book of the series, I couldn’t help but immediately start the sequel to that one. So Tally is pretty now… I expected that one, since it was actually revealed in the first book. I also expected her not to care about her brain being totally altered and damaged, but I didn’t expect that all of her memories would be as fuzzy as they were.

In the beginning of the book, Tally is acting almost exactly as every other pretty is in that messed up town of theirs. David is nowhere to be seen and Tally is pretty much left to fend for herself. As all the pretties are living their pretty lives and going to their pretty partys, Tally is starting to get closer to a certain guy, called Zane. He seems to be a bit different from the others, trying to make Tally somehow “wake up” from the haze  that she’s into and be “bubbly”, and they start falling for each other. And that Ladies and Gentlemen is what we call a love triangle!

I don’t generally hate love triangles. In fact if they’re well made I really like them. And in this case it was definitely well made and it actually had a reason for being there. All of Tally’s memories from when she was ugly are very unclear and she doesn’t think that all of those things are important anymore. So she definitely doesn’t feel a commitment or anything against David, which makes her free to start something new! And Zane is a really awesome guy! In a world were everyone is exactly the same, he stands out. Not much, but still… Even a little makes a difference here.

What I really enjoyed about this book was that I now knew a lot of things about this world, which made me enjoy the story so much more! In the first book it took me a while to understand who were the rusties and the smokies, how was everything working and what the heck there was going on! The second book was not as complicated and I now understood this world and what was going on.

The only reason I ended up giving this 4.5 stars was the ending. I’m not going to reveal anything, but it really pissed me off and I’m not looking forward for the rest of the series as much anymore. I really hope that the 3rd book is going to be good, just because the first book was great and I really want to like this series!

“Getting dressed was always the hardest part of the afternoon.”