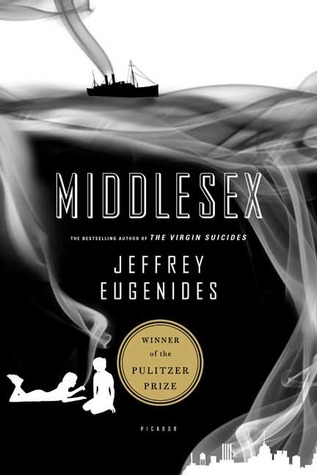 In the spring of 1974, Calliope Stephanides, a student at a girls’ school in Grosse Pointe, finds herself drawn to a chain-smoking, strawberry blond clasmate with a gift for acting. The passion that furtively develops between them–along with Callie’s failure to develop–leads Callie to suspect that she is not like other girls. In fact, she is not really a girl at all.

The explanation for this shocking state of affairs takes us out of suburbia- back before the Detroit race riots of 1967, before the rise of the Motor City and Prohibition, to 1922, when the Turks sacked Smyrna and Callie’s grandparents fled for their lives. Back to a tiny village in Asia Minor where two lovers, and one rare genetic mutation, set in motion the metamorphosis that will turn Callie into a being both mythical and perfectly real: a hermaphrodite.

Spanning eight decades–and one unusually awkward adolescence- Jeffrey Eugenides’s long-awaited second novel is a grand, utterly original fable of crossed bloodlines, the intricacies of gender, and the deep, untidy promptings of desire. It marks the fulfillment of a huge talent, named one of America’s best young novelists by both Granta and The New Yorker.

“Can you see me? All of me? Probably not. No one ever really has.”

At first I was hesitant to read this book, mainly because I don’t usually read adult non-fiction and this one was also a quite massive book. As it turned out, though, I really enjoyed it and it was much, much easier to read than I thought it would be. Not that it was anything like the fast-paced young adult books I usually read, but the language used was quite easier to read as I had imagined and the content of the book was very interesting.

The narrator of the book is Cal Stephanides in his adult age. In spite of that we experience very little about his life now, as he mostly narrates the lives of his grandparents, parents and of himself when he was still a little girl. And yes I meant to say girl. Cal Stephanides was born and raised as a girl and only later in his life does he realize that he was actually born a hermaphrodite and decides to continue his life as a man. Don’t worry there were no spoilers in this and just now, as I’m writing, I realize that there’s almost nothing I can tell that will spoil anything of this book. Just because the ending is obvious from the very beginning of the book. It’s the story that matters. The events that led Calliope Stephanides to change her identity into that of a man.

The story begins in the early 20th century in Asia Minor and Cal narrates the story of his grandparents as if he was there and knew everything that was happening. So in the beginning of the book we meet Cal’s grandmother (Desdemona) who actually evolved to my favorite character of the book. To me (coming from Greece) Desdemona felt like a real person. She reminded me of my own grandmother and the stories she used to tell of when she was little. So I guess the praise here goes to the writer, who managed to understand and describe accurately the every-day life and the traditions of Greek people of that time.

Later in the book Desdemona and her husbant migrate to America and slowly the focus of the story starts shifting from them to their children (Cal’s parents). When I realized this was happening I was sad, because I didn’t want to stop reading about Desdemona! But even though my favorite character no longer had a lead role, I continued enjoying the book and the plot was getting more and more interesting!

I don’t really have anything negative to say about this book. The reason I gave it 4 stars, instead of 5, was that I was at times wishing I had something more fast-paced to read and for that reason skipped the narration at some points to get to the dialog. But this only had to do with my own reading habits and the books I’m used to reading.

“I was born twice: first, as a baby girl, on a remarkably smogless Detroit day of January 1960; and then again, as a teenage boy, in an emergency room near Petoskey, Michigan, in August of 1974. . .”