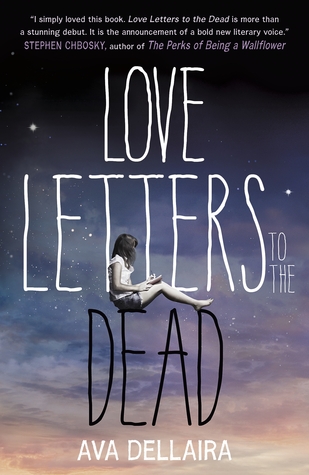 It begins as an assignment for English class: Write a letter to a dead person.

Laurel chooses Kurt Cobain because her sister, May, loved him. And he died young, just like May. Soon, Laurel has a notebook full of letters to the dead—to people like Janis Joplin, Heath Ledger, Amelia Earhart, and Amy Winehouse—though she never gives a single one of them to her teacher. She writes about starting high school, navigating the choppy waters of new friendships, learning to live with her splintering family, falling in love for the first time, and, most important, trying to grieve for May. But how do you mourn for someone you haven’t forgiven?

It’s not until Laurel has written the truth about what happened to herself that she can finally accept what happened to May. And only when Laurel has begun to see her sister as the person she was—lovely and amazing and deeply flawed—can she truly start to discover her own path.

In a voice that’s as lyrical and as true as a favorite song, Ava Dellaira writes about one girl’s journey through life’s challenges with a haunting and often heartbreaking beauty.

“I think a lot of people want to be someone, but we are scared that if we try, we won’t be as good as everyone imagines we could be.”

I’ve never read about a character that needs psychotherapy more than Laurel does. I’m so confused about this book. I loved some aspects of it and I hated some others.

Let’s start from the beginning. I started reading the book and I read about 100 pages in one sitting, which I almost never do. I was intrigued by the story, but at the same time I was so annoyed by the main character, Laurel. I felt like she wasn’t a real person because she was thinking very lyricaly and abstractly and at the same time some of the things felt like they were coming from a 10-year-old instead of a teenager. She had a completely black-and-white way of thinking, which is definitely not how a teenager normally thinks.

Another thing that bugged me about the book was how nobody noticed that Laurel was acting strange. She was trying to mimic her sister and was wearing her clothes, going to parties etc and neither her father nor her aunt or her friends or anyone seemed to notice it. On the contrary people were telling her how proud they were and how well she was dealing. It made absolutely no sense to me.

The mimicing part though was quite thought-provoking for me. It was an interesting idea that she would try to mimic her sister in order to somehow keep her still alive. On the other hand it was so strange that she could only see her sister as a perfect person and not recognise any of the mistakes or the bad things she used to do. Again it was like she was 10 years old and couldn’t realize that a person can have good and bad sides and it’s not an either-or kind of thing.

Another part that I liked were several of the other characters in the book like Laurel’s friends and even Sky (the love interest) although he was seen by Laurel as someone so perfect without ever being explained why. He did have his moments, though, were I thought he was quite mature, in contrast to Laurel, which is why I didn’t ship them at all.

All in all it was a good idea for a book, it also had some interesting plot-twists, it was easy to read and kept me interested all the way through. However the childish way of thinking, which didn’t match with the supposedly profound thoughts that Laurel was having made me roll my eyes a few times. In the end, though, I did enjoy reading the book which is why I gave it 3.5 stars.

Dear Kurt Cobain, Mrs Buster gave us our first assignment in English today , to write a letter to a dead person.