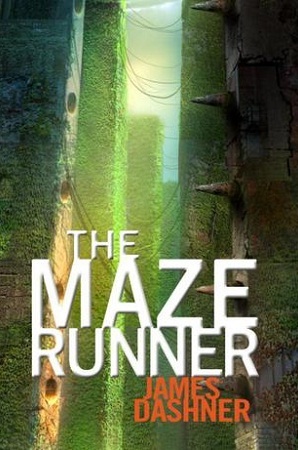 “If you ain’t scared, you ain’t human.”When Thomas wakes up in the lift, the only thing he can remember is his name. He’s surrounded by strangers–boys whose memories are also gone.Outside the towering stone walls that surround the Glade is a limitless, ever-changing maze. It’s the only way out–and no one’s ever made it through alive.Then a girl arrives. The first girl ever. And the message she delivers is terrifying.

In the beginning of the book we find ourselves in a place, called the Glade, filled with teenage boys who have lost all of their memories except for their names. Around this Glade there’s a huge maze and the boys pretty much try to find a way out of it and avoid getting eaten by some weird metal monsters.

So in the beginning of the book we’re just thrown into this weird world together with the protagonist, Thomas. Nothing really makes sense in the beginning. There’s these weird kids using an even weirder slang that no one can understand. I mean seriously! What is up with that? Since when do “klank” and “shuck-face” sound cool? This thing really annoyed me throughout at least the first half of the book. And, of course, Thomas starts asking questions about what is what, but he doesn’t get any answers! At all. I still don’t understand why no one wanted to explain to him how things worked. The whole book can be summed up in these sentences:

Thomas: “Do you know what’s in the maze?”
Someone: “Stop asking questions greenie!”

Thomas: “Have you tried getting out?”
Someone: “You ask too many questions Tommy”

Thomas: “What’s your name?”
Someone: “Shut your hole shuck-face”

Yup. That was pretty much the whole book. Kind of hard to understand what’s going on when you don’t get any answers. On the other hand I did enjoy trying to figure things out on my own. Without any help from those idiots. Speaking of idiots, this book was so full of them. I can’t really say I liked any of the characters a lot (not even Thomas) and quite frankly I didn’t care if they would live or die. I just wanted them to do me a favor and solve the mystery before they die.

And what a mystery it is. That was actually my favorite part of the book. The whole premise of it. It is quite an original idea (at least I haven’t read anything similar to this) and it was so… well, mysterious! You have these kids who have no idea who they are or how they ended up there or who the heck put them there. Who created this maze? Are they watching them? Are they even on the earth? And it gets more and more complicated. I would seriously read all three books just to figure out what the hell is going on.

Another thing I loved about the book was it’s pace. There was always something new happening, but not everything at once. They would solve one crisis and the next minute a new one would appear. So it kept me turning page after page. Definitely an upside of the book.

So, to be honest I wasn’t sure how to rate this book. I liked it in general, but there were a couple of things that annoyed me. That’s why I ended up giving it 3.5 stars. I will pick up the sequels for sure, because I really need to know what’s going on. There weren’t really that many answers on this book. I would probably recommend this book, but I need to read the sequels to make sure. The story has a lot of potential, but I want to see where it’ll go.

He began his new life standing up, surrounded by cold darkness and stale, dusty air.

Expecting it to be more scary.
Didn’t connect with the characters at all.
BUT. Loved the premise.
Really want to have this mystery solved.

The A to Z Challenge is an annual blogging challenge. It isn’t restricted to book blogs – all kinds of blogs can participate. It takes place every year in April and during that month you have to write a post on the designated days (all except Sundays). These posts must have some correlation to the letter of the day. So, there will be a total of 26 posts starting from the letter A and ending with Z. Here is a list of all my posts.

12 thoughts on “THE MAZE RUNNER by James Dashner | Review”