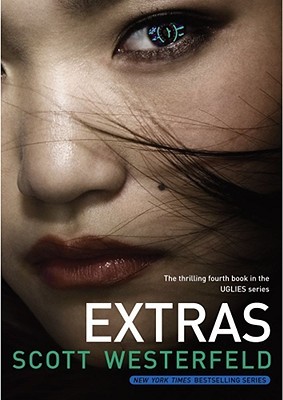 It’s a few years after rebel Tally Youngblood took down the uglies/pretties/specials regime. Without those strict roles and rules, the world is in a complete cultural renaissance. “Tech-heads” flaunt their latest gadgets, “kickers” spread gossip and trends, and “surge monkeys” are hooked on extreme plastic surgery. And it’s all monitored on a bazillion different cameras. The world is like a gigantic game of “American Idol.” Whoever is getting the most buzz gets the most votes. Popularity rules.

As if being fifteen doesn’t suck enough, Aya Fuse’s rank of 451,369 is so low, she’s a total nobody. An extra. But Aya doesn’t care; she just wants to lie low with her drone, Moggle. And maybe kick a good story for herself.

Then Aya meets a clique of girls who pull crazy tricks, yet are deeply secretive of it. Aya wants desperately to kick their story, to show everyone how intensely cool the Sly Girls are. But doing so would propel her out of extra-land and into the world of fame, celebrity…and extreme danger. A world she’s not prepared for.

“You see, freedom has a way of destroying things.”

I’m trying to decide how to rate this book… I know I didn’t like it. But what were its positive aspects? There’s really not much. And that’s just a nice way of me saying there was really nothing I liked about this book.

First of all, this is supposed to be the fourth book in the uglies series, but it was more like a companion novel to me. It takes place a few years after the last book ended and the characters are all new. There is no longer the “pretty” system going on, it has now switched to the “popularity” system. Everyone just wants to be popular and that’s the way of becoming rich. So we follow the story of Aya, who is very low in popularity ranking and is trying to find a good story to publish in order to become more famous. There’s also a boy involved at some point and some ethical dilemmas and so on. I can’t say that the story was predictable, but it was so bad that I even wish it was predictable. There was the supposed mystery of who was the number one popular person, but it was so obvious from the beginning who it was gonna be…

Aside from the storyline, which was getting more and more ridiculous with every page, I also didn’t find any of the characters interesting. They were all a bit flat to me. Aya was just so superficial and annoying at times and she stayed that way throughout the whole book!

All I can really say is that I was very disappointed by this book. The first book in the series was just so good! And to have a book like that be the last book, is simply frustrating. I actually wish that “Uglies” was a standalone. The second book was also pretty good, but after that it really went downhill. The only reason I finished reading this was because I was in a train for six hours with nothing else to do.

One thought on “EXTRAS by Scott Westerfeld | Review”