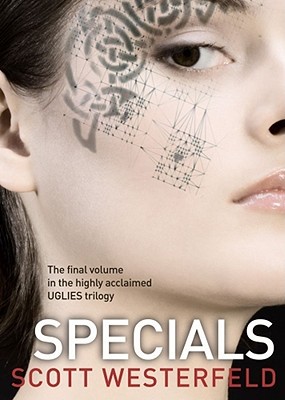 Publication: May 2006 by Simon Pulse

“Special Circumstances”: The words have sent chills down Tally’s spine since her days as a repellent, rebellious ugly. Back then Specials were a sinister rumor — frighteningly beautiful, dangerously strong, breathtakingly fast. Ordinary pretties might live their whole lives without meeting a Special. But Tally’s never been ordinary.

And now she’s been turned into one of them: a superamped fighting machine, engineered to keep the uglies down and the pretties stupid.

The strength, the speed, and the clarity and focus of her thinking feel better than anything Tally can remember. Most of the time. One tiny corner of her heart still remembers something more.

Still, it’s easy to tune that out — until Tally’s offered a chance to stamp out the rebels of the New Smoke permanently. It all comes down to one last choice: listen to that tiny, faint heartbeat, or carry out the mission she’s programmed to complete. Either way, Tally’s world will never be the same.

“That Shay was in possession of hand grenades was a comforting thought showed what kind of night this had become.”

I honestly started reading this book without great expectations, because after reading the first few pages it felt like the story was going to be pretty repetitive. So, in the first book we have Tally basically trying to escape from becoming pretty, in the second she is trying to break through the pretties’ way of thinking and in the third book she is trying to break through the specials’ way of thinking. It’s the same story over and over again!

Not to mention that the first third of the book is actually quite boring. There’s not much going on, Zane is still trying to recover from his brain injury, Shay has turned into a complete bitch and Tally is quite unrecognizable. The story picks up after the first part, but it’s really the same story again! It’s quite predictable, to say the least.

The most disturbing part of the book was the whole “Cutters” group. They’re actually cutting themselves to become “bubbly” now! I mean not eating was one thing (although very close to anorexia), but causing self-injury without even thinking about it? That’s just too much!

All in all, I’m really disappointed by this book, because the series started out so promisingly, that it’s really sad to have a book like this! I’m going to read extras, since A I’ve already bought the book, B it’s set some years later with different characters, and C for the sake of finishing the series!

“The six hoverboards slipped among the trees with the lightning grace of playing cards thrown flat and spinning.”

One thought on “SPECIALS by Scott Westerfeld | Review”